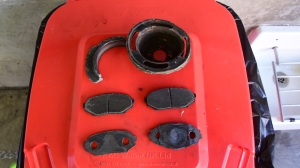 After the dust had settled, the car was offloaded and everyone had been rested from the long day at Donington, it was time to take stock and find out what had happened to the car. It didn’t take particularly long, a quick inspection of the pulley area showed quite clearly, the four bolts holding the harmonic dampener (main pulley wheel) on to the crank gear had all sheared or wobbled out. A quick google reveals this is not uncommon, although a rarer occurrence than most.

The cambelt was fried and when the car came in, we found the coolant was boiling over too. We suspected the problems ran slightly deeper than simply a case of four bad bolts, and decided to look into sourcing an alternative engine. We found one up in Yorkshire that had been freshly built to take a turbo, but the seller changed their minds and decided upon a different project…. The engine had been totally refreshed with new pistons, rings, shells, etc. so it seemed like a decent prospect. The only catch was, the engine was 200 miles away up in Yorkshire, ouch.

After what felt like a very long trip up to Yorkshire Matt humped the engine into the back of the Volvo and secured it down with some fairly heavy handed ratchet straps. The engine was missing it’s flywheel and clutch, so a second hand flywheel was bought along with a new Exedy clutch kit.

Let’s hope we manage to get everything out of the car and get the engine swapped in time for Christmas..!

What’s on and Tweeting