So! The night before our track outing actually didn’t go too badly, the car loaded up nicely and the Volvo adequately took a spare set of tyres and most of the tools from the garage, plus a few other bits and pieces we had packed for the day. So far So good.

On rolled 5am and frankly, none of us slept that well. Brod (our tame trailer driver and Matt’s dad) was concerned about the almost 3 hours of towing at 5am in the morning. Matt was simply excited to get out in the car and try to set a new lap record, Ali meanwhile… Actually Ali slept just fine.

Upon arrival the air was damp, the sky was grey, the tarmac slippery. It was going to be a morning full of red flags the first of which, happened in the second set of sighting laps (unsurprisingly). Matt was clearly going to have a challenge on his hands in a car he didn’t know at a track he’d only driven a few days before on Project Cars. To say we were all a little nervous was probably an understatement.

Nevertheless Matt got his boots, gloves and lid out for the first time in a long time, dusted everything off and fired the car up. Going up the pitlane everything felt firm, tight and balanced. The car was already winning him over. 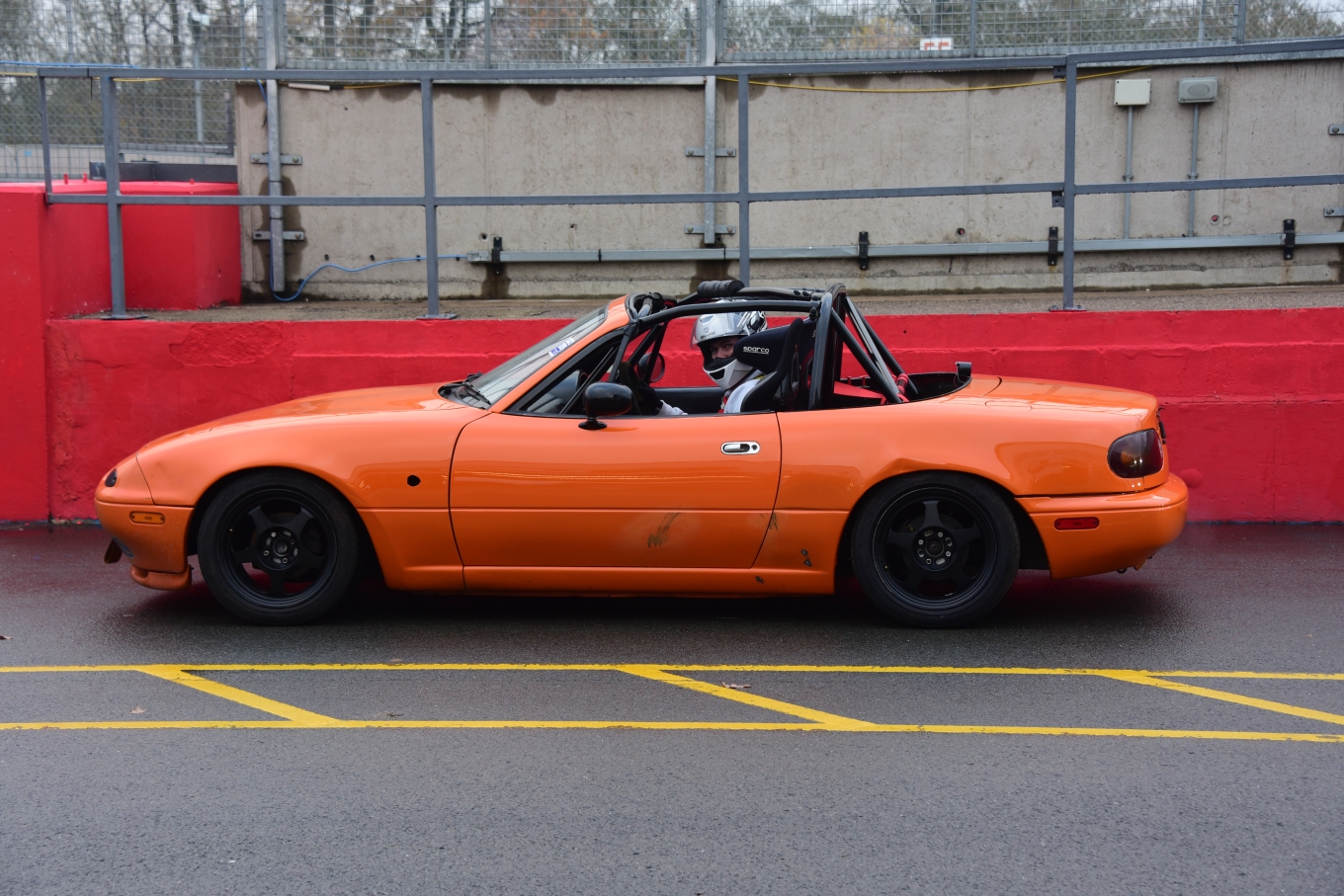 Sighting laps complete Matt started to pick the pace up with each passing lap, getting more and more of a feel for the car. The first stint was relatively uneventful however, in stint number two he found an off-line in the wet which he couldn’t make stick and ended up in the gravel for what would be the first of 3 times that day.

As the day progressed the car just got better, and better, and better! It really did feel like a well put together car and handled superbly in the corners. A few suspension tweaks were bound to be needed in order to match the car to the driver, but overall they seemed to be bonding well. After a while though, the old brake pads in the car we had feared were coming to the end of their life, came to the end of their life.. One of the pads eventually welding itself to the caliper piston! Sadly, that wasn’t going to be our only issue that afternoon…

Having convinced Ali he would need to bed the brakes in, she joined Matt in the passenger seat for a few runs around the circuit.

Ali enjoyed the car more than she thought, and seemed glad to have done it. After dropping her back in the pits, brakes successfully bedded in, Matt took the car for one last 15 minute blast around the track. With a mostly dry circuit and an enthusiasm to catch a Caterham, Matt set about his mission and eventually executed, after 3 laps of chasing, in taking one of the caterhams in his second to last lap.

Last lap rolling around and a thunderous “clunk” comes from beneath the car – unbeknownst to Matt, the pulley wheel had fallen off the engine! A ginger lap later, the car was back in the pits and on to the trailer, somehow surviving the remaining 1.5 miles of circuit all the way back, without throwing the timing belt off! Whew.

Sigh… Maybe the car wasn’t such a great purchase after all? Back to the garage for some serious spanner time!

All in all, the day was still great, and the chassis / setup on the car feels brilliant. It was sad it had to end the way it did, but overall we are happy with the results from the day, and rather this happened now than in our first race weekend.

What’s on and Tweeting